Whenever I click on my chrome shortcut I get a new window (as expected) but I also get a new Unity entry with a different icon (one from an iconset I had been using before upgrading to 14.04 - don't really remember the name). The new unity entry does not seem to originate from a correct .desktop entry because all the submenus are missing from it (New incognito window, New Window etc.) and it has a permanent tag '(1) Facebook' no matter the window title (see attached picture).

I have uninstalled and reinstalled chrome in hope that it would help which it did until restart but now I get the same behaviour.

Note that I haven't altered any .desktop files regarding chrome and I can only find one file: /usr/share/applications/google-chrome.desktop which seems to be correct (with submenus etc.) 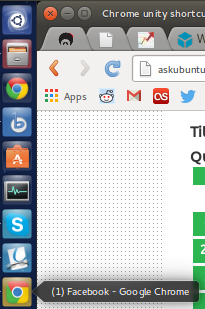 You will possibly also have a Chrome .desktop file in ~/.local/share/applications. Probably when you type "chrome" in Dash, it will appear as well. Just remove the local one.

Another possibility, even more likely since it is called "Facebook", is that you have a (presumably local, in ~/.local/share/applications) .desktop file called Facebook, using Chrome. Webapps do leave a .desktop file.

When looking for the right .desktop file to remove, it is good to know that the filename of the .desktop file can be different from the name you see in Nautilus (and Dash/Unity!); if the file is in /usr/share/applications, or if it is executable and in ~/.local/share/applications, the displayed name is defined in the Name= line of the file, and is different from its actual filename.

Either which way, you must have mutiple occasions of desktop files, calling Chrome in their native command, That is: the command in the headsection of the desktop file (above the Actions= line). Look in both /usr/share/applications and ~/.local/share/applications for duplicates. If you are not sure you picked the right one to remove, open it with gedit, see what is in the line after Actions= If the defined shortcuts match the "right" version (New incognito window, New Window etc.), keep it. Another tip to identify: local .desktop files (in /usr/share/applications) show their icon if you make them executable. If you suspect a file, make it executable to see if the icon matches your "secundary" Chrome .desktop file.

Added by: Miss Mina Murray I