I create a screentshot with ALT - PRINT.

The file gets created in my ~/Bilder (German for Images) directory.

But if I open Gimp and then choose "open" then "Recently files", I don't see the screenshot I took a minute ago.

How to make the screenshot available in the recently use files?

I mean "recently used files" from this dialog: 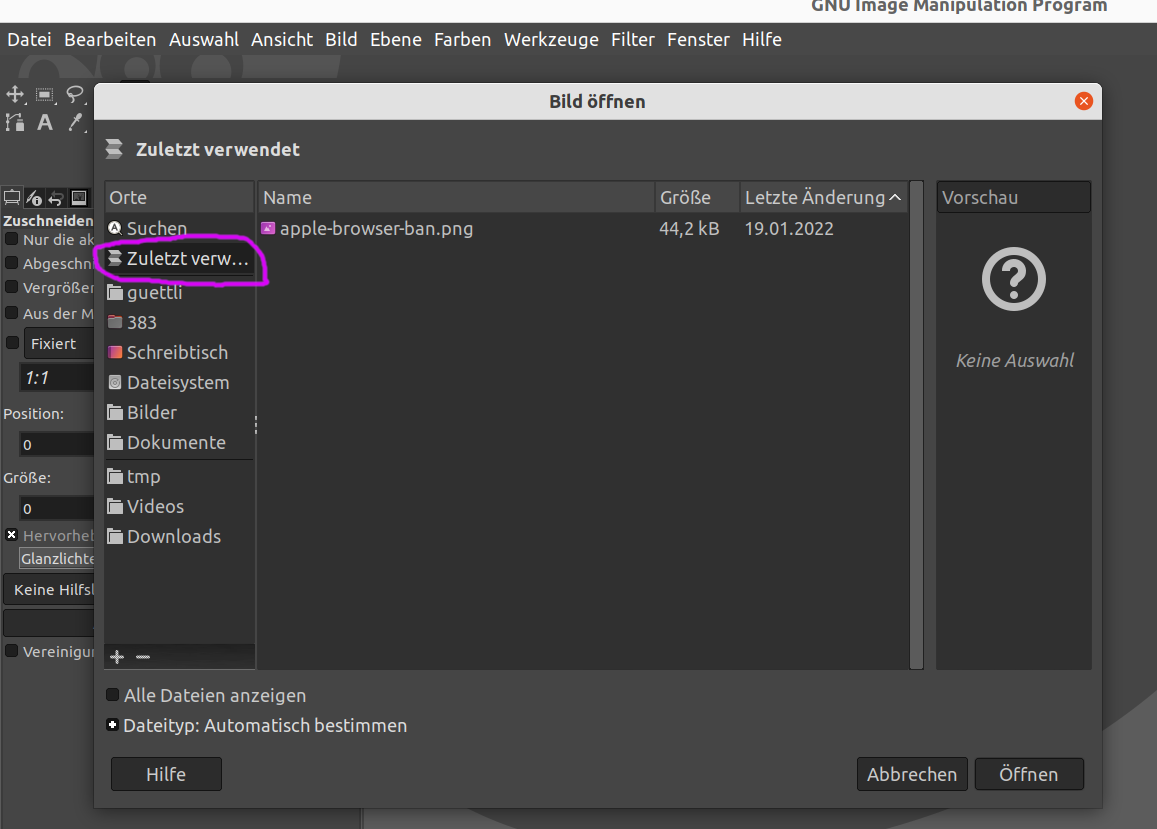 First, there are two distinct "Recent files" in Gimp:

This is all about the second ones.

The Recently used files in Gimp come from the file .local/share/recently-used.xbel. This file is normally shared among applications.

But in some packagings (flatpak, at least, IIRC) Gimp is "sandboxed" and made to see a virtual file system where directories can be different from those of the rest of the OS, and this makes it use its own copy of .local/share/recently-used.xbel that defeats its purpose.

I no longer use the Gimp flatpak, but at the time I managed to fix the problem by replacing the .local/share/in the flatpak by a soft link to the real .local/share/. You can't link recently-used.xbel directly because to update it applications (including Gimp) erase it and recreate it and this replaces the soft link by a real file. Linking the parent directory works because the applications do not remove/replace the directory so the link remains. As far as I could tell this has no ill effects (recently-used.xbel appears to be the only file that Gimp uses in it).

Another side-effect of sandboxing was that Gimp had its own private /tmp so you couldn't share files with other apps that uses /tmp for this (in my case, the Spectacle screen capture app). But this could have been fixed.

No email message when attachment is sent
Can't set "Always on top" for the Skype call window
Split screen with a singe shortcut(without using super + left or right)
/usr/bin/x86_64-linux-gnu-ld: gen_context.o: unknown type [0x20] section `'
Find out the total system installation size
Electron - Cannot run application on Ubuntu 64-bit
md, mix disks and partitions in an array
Ethernet Ubuntu to Raspberry Pi
FLASH PLAYER won't upgrade [duplicate]
Where is "My Computer" in Ubuntu 14.04?
Start Ubuntu from SDHC card without booting into it
How to recover ASIX AX88179 from backports installation
Is Ubuntu the operating system or is Linux considered the operating system?
How do I load the tp_smapi kernel module on a Lenovo Easypad?
How to add a printer in gnome-shell
mouse pad freezes
Is there animation software available?
Cannot boot from live cd
How can I install my Xbox 360 wired controller?
What is the 'Dark Side' of Skype? [closed]
A B C D E F G H I J K L M N O P Q R S T U V W X Y Z 1 2 3 4 5 6 7 8 9