In the applications menu, Firefox Web Browser appears with the correct name.

When launching, it's name changes to just Firefox, and its icon appears as a greyscale version, instead of the usual symbolic version.

This is not particularly annoying - just a minor inconsistency, but it means that the running Firefox icon is separate to the pinned icon.

I did recently install Firefox inside wine, which added a new shortcut, but I don't see how it could conflict.

The last time I encountered this issue was in Windows 7 and with Google Chrome, so it's been a while.

I have tried reinstalling Firefox, but that didn't help.

There may have been some background updates (I kept automatic updates on for security reasons - I don't usually bother to install them otherwise).

I can probably manage this small issue, it just may be a bit hard to get used to having the icon in two different places. I don't want to pin them next to each other, because that looks even weirder - I'm already used to some non-native apps having this issue.

Edit: It seems to be related to Wine, as when launching from the new logo, Wine starts up, before closing again. 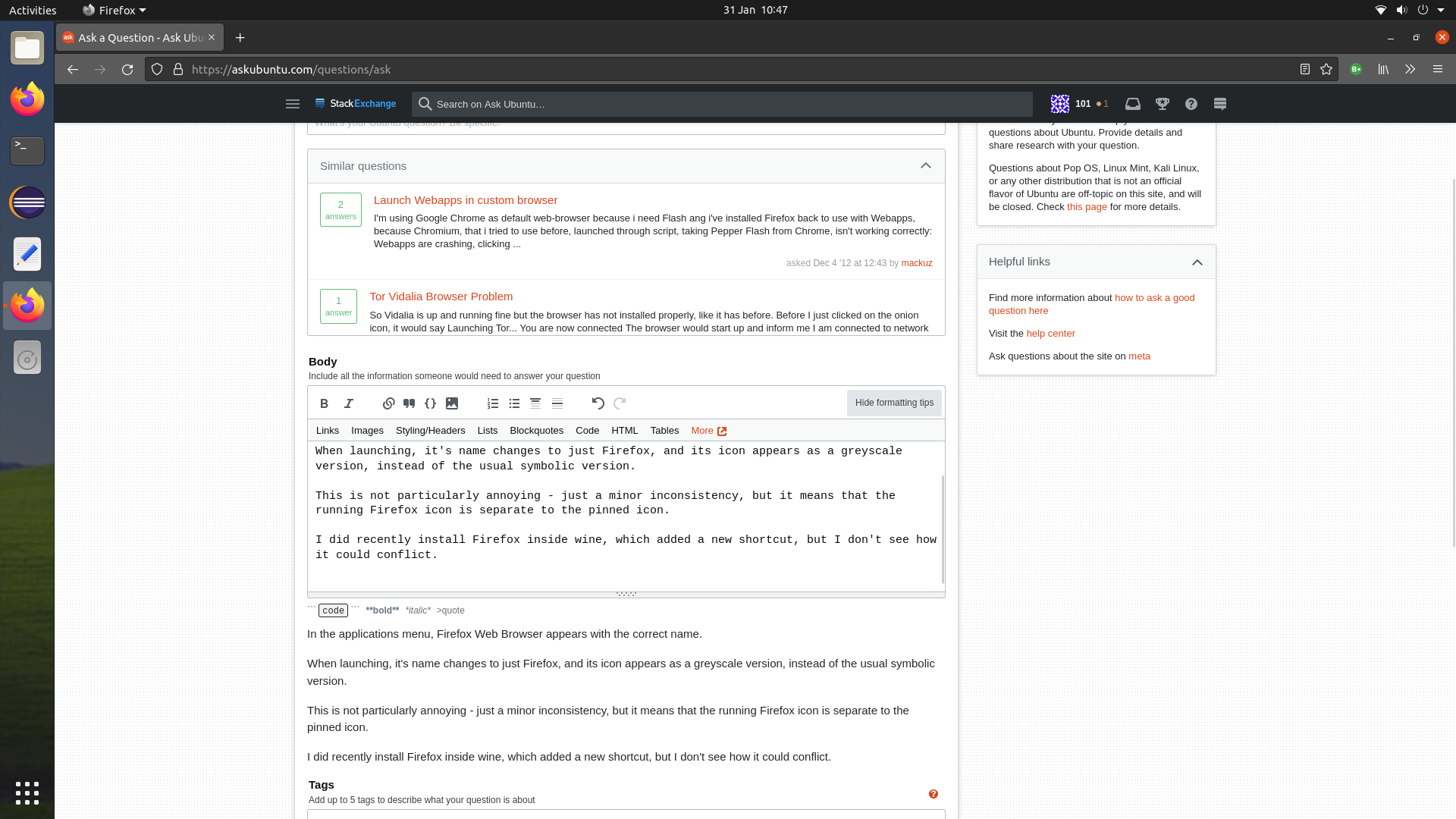 It didn't take me long to realise that this was directly related to Wine.

I hid the duplicate version of Firefox in my menu, but Firefox Web Browser must have picked up the other desktop file.

If this happens to you, don't use Wine if the software is already available in Linux. I was just doing this for fun to see what happened. If you do want to do this, make sure to remove the desktop files properly, otherwise you may encounter issues.

I have had similar issues with desktop files, such as adding a Java-based application to my menu, and all Java processes appearing with the same icon in System Monitor.

ubuntu--vg-ubuntu--lv partition full for no apparent reason?
Issues with Netplan - Static IP
How to use Audacity to record via builtin microphone
Using Inkscape with Ubuntu (files on another partition)
Disable purple screen at gnome start for kiosk app in Ubuntu 18.04
Audacity and Microphone problem
Ubuntu Bionic Server edition + Netplan: Not getting static IP on a ethernet connection
Ubuntu 18.04 fresh install fails - won't boot
I cannot type in the Konqueror web-browser search bar
Doesn't Shut Down Properly Ubuntu 16.04, Have to forcefully off the laptop
Is There A VCS-Like System on Libreoffice Documents
Unable to boot into Windows after installing Ubuntu, how to fix?
Could I install Ubuntu on SD card and run it from my Chromebook?
Shell script running but not opening terminal [duplicate]
What exactly is a script? [duplicate]
Can't type Korean In Lubuntu
Opening and controlling a window over ssh
How do I automatically load my ~/.zprofile when I log in?
Shift Switcher versus Kile shortcut
How to queue commands
A B C D E F G H I J K L M N O P Q R S T U V W X Y Z 1 2 3 4 5 6 7 8 9